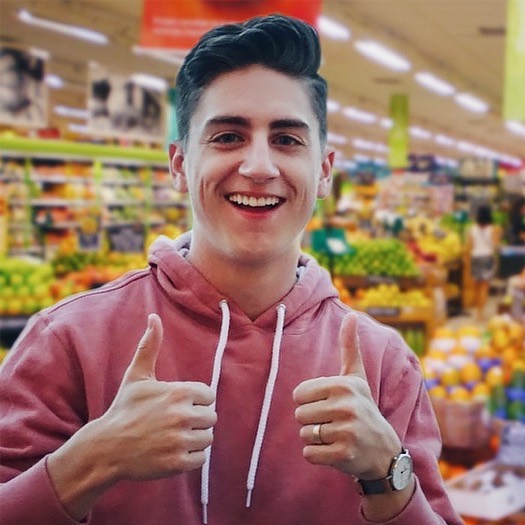 Danny Gonzalez is a former Vine star with a whooping 3 million followers. Known for his dry and sarcastic humour, it wasn’t long before YouTube fell for his bells and whistles too. Danny leveraged his pre-existing Vine following to go viral on YouTube. His reaction videos, parody songs and unusual pranks fetched him over 3.6 million YouTube subscribers. Here’s how Danny made the massive transition.

1. He puts a unique spin to his pranks

Danny moves away from traditional pranks and positions his pranks as “awful” fails. For example, in his viral “Trying Troom Troom’s Awful Pranks” video, Danny asks his dad whether he wants an ice cream, and when his dad replies with a yes, Danny presents a light bulb that looks like an ice cream. This video boosted his subscriber count from 600,000 to over 1 million subscribers.

2. He reacts to trending topics

Danny finds topics that are already trending and builds on them. His reaction video “I’m Very Worried About This Movie (Swiped w/ Noah Centineo)” where he reacts to the trending Netflix movie “Swiped”, has over 5.4 million views.

3. He experiments with unscripted content on his second channel

Danny’s second channel “2 Danny 2 Furious” has a whooping 750,000 subscribers. He dedicates this channel to unscripted or unplanned videos. His second channel is a great place to test the waters and reach out to a new audience.

4. He collaborates with creators from the same genre

Danny often makes videos and goes on tour with other commentary YouTubers like Drew Gooden, Ryan Trahan and Kurtis Conner. This is a great way to expose his videos to a highly targeted audience and build on his virality.

5. He uses an inclusive strong call to action

Danny concludes his videos with a witty catchphrase to increase subscriptions.  “Subscribe to join Greg, the strongest army on the internet. Don’t look that up.” He directly calls out to his fandom which he has named “Greg” and throws in the term often to make his fans feel inclusive.

6. He gives random shoutouts to his viewers

Be it Vine or YouTube, Danny sure knows how to keep his fans entertained. We can see that “building fan engagement” is at the heart of Danny’s viral strategy and this mantra is working wonders for his channel.